The Love Serve Remember Foundation (LSRF) is dedicated to preserving and continuing the teachings of Neem Karoli Baba and Ram Dass. The foundation facilitates the continuation of these teachings through online courses, blog content, films, podcasts, social network channels and collaborative projects with conscious artists and musicians.

Ram Dass first went to India in 1967. He was still Dr. Richard Alpert, a prominent Harvard psychologist and psychedelic pioneer with Dr. Timothy Leary. He continued his psychedelic research until that fateful Eastern trip in 1967, when he traveled to India. In India, he met his guru, Neem Karoli Baba, affectionately known as Maharajji, who gave Ram Dass his name, which means “servant of God.” Everything changed then – his intense dharmic life started, and he became a pivotal influence on a culture that has reverberated with the words “Be Here Now” ever since. Ram Dass’ spirit has been a guiding light for three generations, carrying along millions on the journey, helping to free them from their bonds as he works through his own.

Since 1968, Ram Dass has pursued a panoramic array of spiritual methods and practices from potent ancient wisdom traditions, including bhakti or devotional yoga focused on the Hindu deity Hanuman; Buddhist meditation in the Theravadin, Mahayana Tibetan, and Zen Buddhist schools, and Sufi and Jewish mystical studies. Perhaps most significantly, his practice of karma yoga or spiritual service has opened up millions of other souls to their deep, yet individuated spiritual practice and path. Ram Dass continues to uphold the boddhisatva ideal for others through his compassionate sharing of true knowledge and vision. His unique skill in getting people to cut through and feel divine love without dogma is still a positive influence on many people from all over the planet. 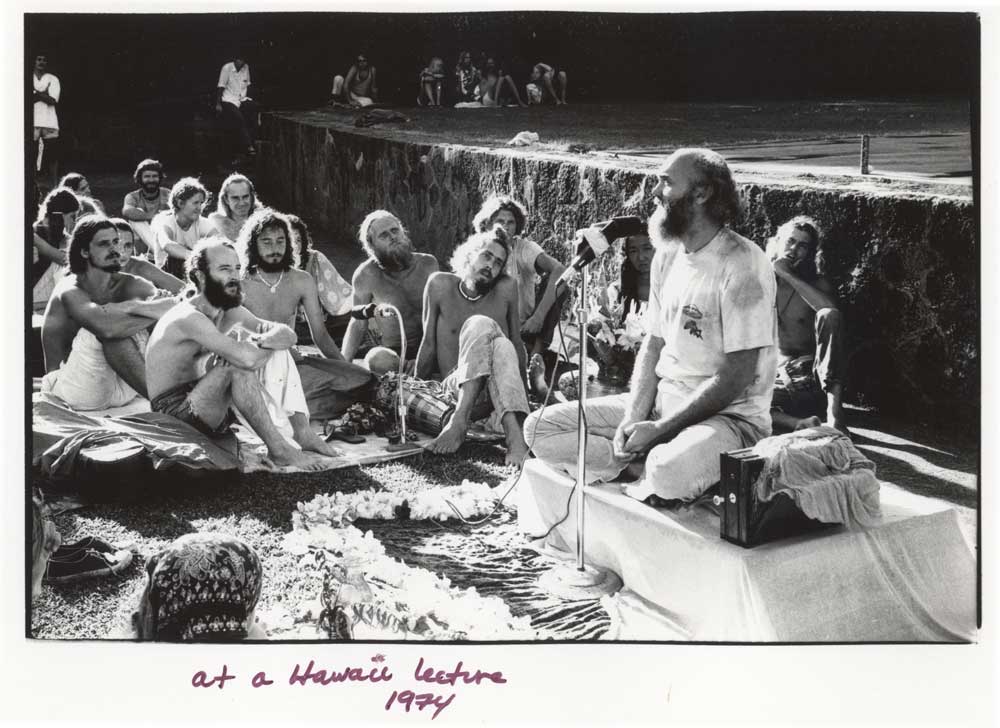 In 1961, while at Harvard, explorations of human consciousness led him, in collaboration with Timothy Leary, Ralph Metzner, Aldous Huxley, and Allen Ginsberg, to pursue intensive research with psilocybin, LSD-25, and other psychedelic chemicals. Out of this research came two books: The Psychedelic Experience (co-authored with Leary and Metzner, and based on The Tibetan Book of the Dead, published by University Books); and LSD (with Sidney Cohen and Lawrence Schiller, published by New American Library). Because of the highly controversial nature of their research, Richard Alpert and Timothy Leary became personae non-grata and were dismissed from Harvard in 1963. Tim Leary and Alpert then went to Mexico, ate mushrooms, and went from being academics to counter-culture icons, legends in their own time, and young at that. For Ram Dass psychedelic work turned out to be a prelude to the mystical country of the spirit and the source of consciousness itself. Mind expansion via chemical substances became a catalyst for the spiritual seeking. This naturally led him eastward to the traditional headwater of mystical rivers, India. Once there, a series of seeming coincidences led him to Neem Karoli Baba and the transformation from Richard Alpert to Ram Dass. 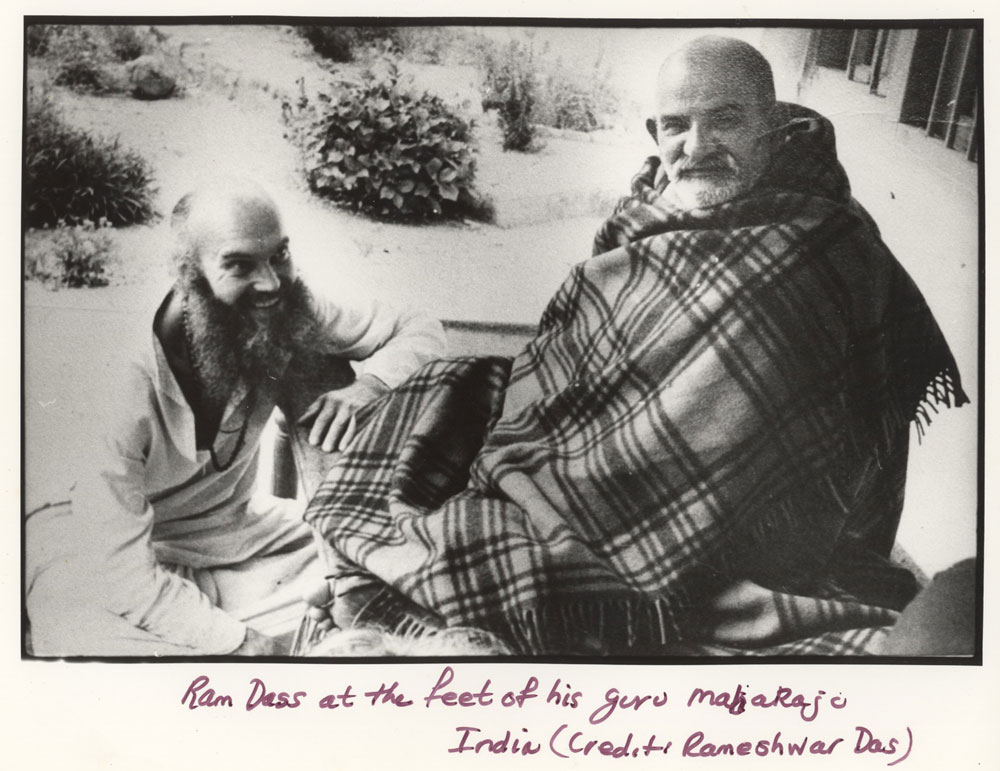 In 1974, Ram Dass created the Hanuman Foundation, a non-profit foundation meant to embody the spirit of service inspired his Guru. The Hanuman Foundation developed the Prison-Ashram Project, directed by Bo and Sita Lozoff, which helped prison inmates grow spiritually during their incarceration and the Dying Project, conceived with Stephen Levine, which helped many bring awareness and compassion to the encounter with death. Also as part of the Hanuman Foundation, Dale Borglum founded and directed the Dying Center in Santa Fe, the first residential facility in the United States whose purpose was to support conscious dying. The Prison-Ashram Project, now called the Human Kindness Foundation, continues under Sita Lozoff in North Carolina and the Living/Dying Project, now a separate non-profit headed by Dale Borglum in the Bay Area, provides support for transforming the encounter with life-threatening illness into an opportunity for spiritual awakening.

Be Here Now, Ram Dass’s monumentally influential and seminal work, still stands as the highly readable centerpiece of Western articulation of Eastern philosophy, and how to live joyously a hundred percent of the time in the present, luminous or mundane. Be Here Now continues to be the instruction manual of choice for generations of spiritual seekers. Forty years later, it’s still part of the timeless present. Being here now is still being here now.

Ram Dass was a co-founder and advisory board member of the Seva Foundation (“seva” means “spiritual service” in Sanskrit), an international service organization. Seva supports programs designed to help wipe out curable blindness in India and Nepal, restore the agricultural life of impoverished villagers in Guatemala, assist in primary health care for American Indians, and to bring attention to the issues of homelessness and environmental degradation in the United States, along with other nations. Ram Dass In the Here and Now

In 1996, Ram Dass began a talk radio program called “Here and Now with Ram Dass.” Seven pilot programs were aired in Los Angeles and the San Francisco Bay Area, and Ram Dass planned to launch the show on a nationwide basis the following year, but it was not to be. On February 19th 1997, Ram Dass suffered a near-fatal stroke, which left him paralyzed on the right side of his body and expressive aphasia limiting his ability to speak, along with other challenging ailments. Though the radio show did not last, his Here and Now podcast (over 100 episodes) lives on today at Ram Dass’ Be Here Now Network.

The after-effects of the stroke once again changed his life, but he was able to resume teaching, writing and sharing his heart. In 2004, following a life-threatening infection, Ram Dass was forced to curtail travel and focus on recovering his health.

Ram Dass moved to Maui in 2004, and began hosting personal and public retreats and events for spiritual seekers, continuing his long-standing legacy of sharing his heart and life with anyone who wanted to access his teachings and his heart. He accessed people through weekly Skype sessions and through a vast library of his teachings hosted on RamDass.org and through social media, books, online courses and podcasts. His most recent books included Be Love Now (2011), Polishing the Mirror: How to Live from Your Spiritual Heart (2013), Cookbook for Awakening (2017), Walking Each Other Home (2018), Changing Lenses: Essential Teaching Stories from Ram Dass (2018), and Being Ram Dass (2021).

Honoring Ram Dass into the Future

Ram Dass passed away at his home on Maui on December 22, 2019. Leading up to his passing, he continued to teach at his semi-annual retreats with other esteemed Bhakti and Buddhist thought leaders.

In the spirit of his wishes, the Love Serve Remember Foundation plans to continue and expand many of the programs, content and offerings you’ve come to know and love. More specifically, we plan to — The Jewel of Maharaji

Since returning from India in 1968, Ram Dass has shared what he called “the jewel of Maharaji”. Love Serve Remember Foundation aspires to carry on these teachings of unconditional love and deep wisdom, as Ram Dass did until his last breath.

This page is a dedicated timeline that displays all of Ram Dass’ books in chronological order.